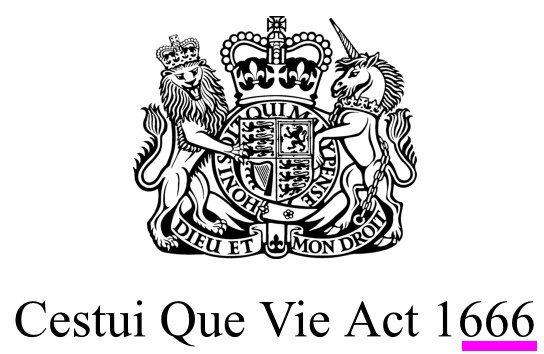 An Act for Redresse of Inconveniencies by want of Proofe of the Deceases of Persons beyond the Seas or absenting themselves, upon whose Lives Estates doe depend.

Recital that Cestui que vies have gone beyond Sea, and that Reversioners cannot find out whether they are alive or dead.
Whereas diverse Lords of Mannours and others have granted Estates by Lease for one or more life or lives, or else for yeares determinable upon one or more life or lives And it hath often happened that such person or persons for whose life or lives such Estates have beene granted have gone beyond the Seas or soe absented themselves for many yeares that the Lessors and Reversioners cannot finde out whether such person or persons be alive or dead by reason whereof such Lessors and Reversioners have beene held out of possession of their Tenements for many yeares after all the lives upon which such Estates depend are dead in regard that the Lessors and Reversioners when they have brought Actions for the recovery of their Tenements have beene putt upon it to prove the death of their Tennants when it is almost impossible for them to discover the same, For remedy of which mischeife soe frequently happening to such Lessors or Reversioners.

[I.] Cestui que vie remaining beyond Sea for Seven Years together and no Proof of their Lives, Judge in Action to direct a Verdict as though Cestui que vie were dead.

If such person or persons for whose life or lives such Estates have beene or shall be granted as aforesaid shall remaine beyond the Seas or elsewhere absent themselves in this Realme by the space of seaven yeares together and noe sufficient and evident proofe be made of the lives of such person or persons respectively in any Action commenced for recovery of such Tenements by the Lessors or Reversioners in every such case the person or persons upon whose life or lives such Estate depended shall be accounted as naturally dead, And in every Action brought for the recovery of the said Tenements by the Lessors or Reversioners their Heires or Assignes, the Judges before whom such Action shall be brought shall direct the Jury to give their Verdict as if the person soe remaining beyond the Seas or otherwise absenting himselfe were dead.

IV If the supposed dead Man prove to be alive, then the Title is revested. Action for mean Profits with Interest.

By the command of God it is lawful to kill an innocent person, to steal, or to commit fornication; because he is the Lord of life and death and all things: and it is due to him thus to fulfill his command.